Get ready to play without limits. World War 3 will launch in Open Beta on September 29! From this date, the game will be entirely free to play for everyone via Steam and the MGLauncher, with no purchase necessary.

The Open Beta launch is the result of extended periods of testing, feedback, and development. We want to thank Closed Beta players and Veterans for their impassioned dedication, as well as the tireless efforts of the development team in achieving this huge milestone. Though the game remains in active development with more work to be done and new content still in the pipeline, we’re thrilled to welcome players around the world to enter the fray. Together, we hope to make World War 3 a uniquely immersive and entertaining gaming experience. 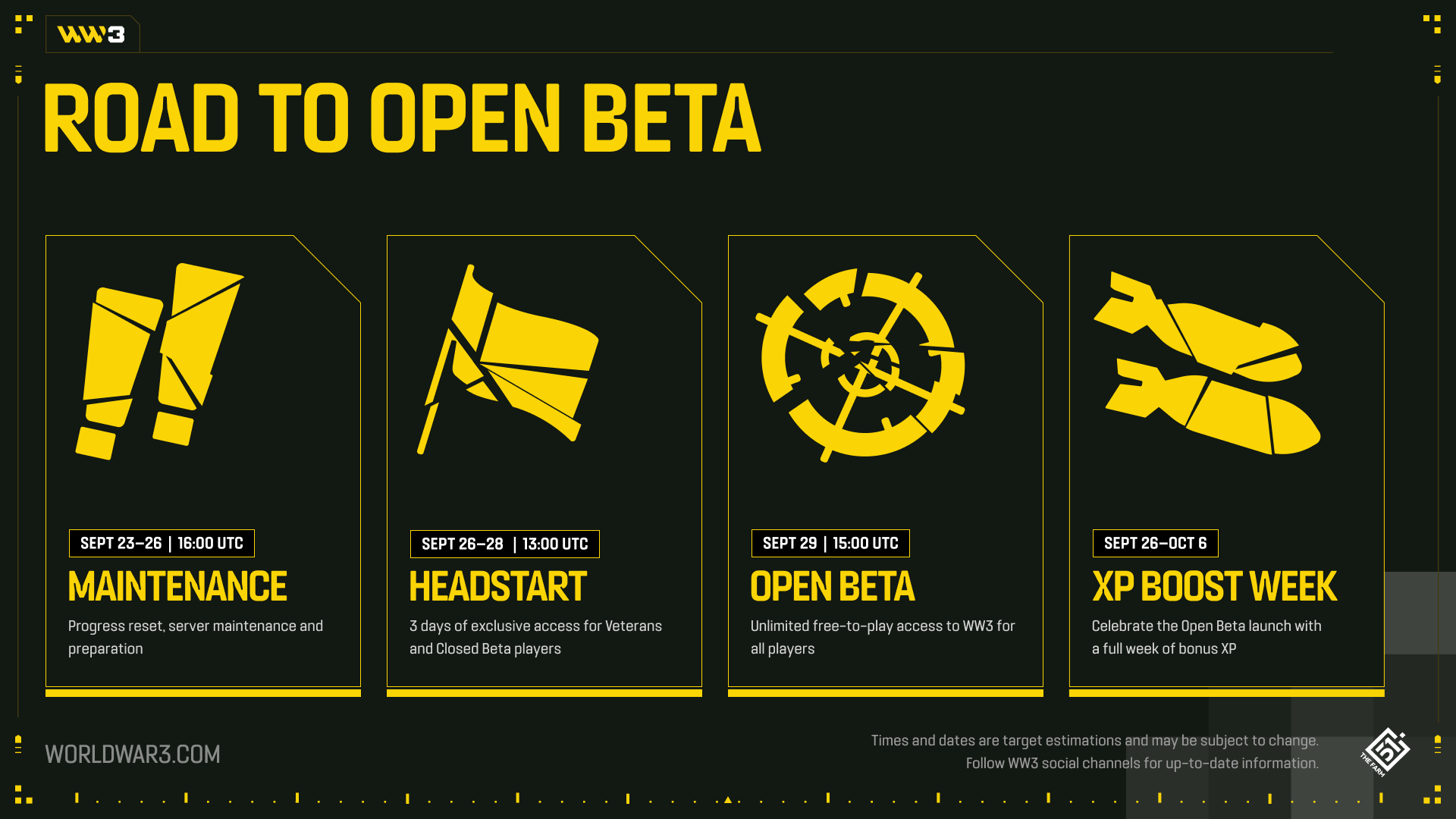 As well as countless improvements made to improve the game on a technical, visual, audio, and gameplay level, we’re adding a newly reworked Smolensk back to map rotation. You can also kick off Open Beta with 10 days of bonus XP from September 26–October 6, plus a round of Twitch Drops starting September 26, featuring the return of the exclusive Task Force F51 set!

GET A 3-DAY HEADSTART FROM SEPTEMBER 26

We’re excited to announce that players who own a Closed Beta Pack or Veteran Pack are invited to enjoy an exclusive three-day Headstart from September 26–28 as thanks for their incredible support of World War 3! Use this additional time to get the jump on progression before Open Beta begins, and experience the game before just about everyone else. And in the meantime, enjoy the rest of the Closed Beta!

SAVE UP TO 30% ON CLOSED BETA PACKS

If you want to get a Headstart on the Open Beta but don’t have a Closed Beta Pack, don’t worry… Closed Beta Packs are still available from the official World War 3 website and Steam, and for a limited time only they’re available for up to 30% off!

Grab one to unlock immediate WW3 access (available until September 23), a three-day Open Beta Headstart from September 26, and a range of awesome in-game content including Battle Passes, Blueprints for weapons, outfits and vehicles, cosmetic gear, and much more (certain items will be granted during Open Beta). 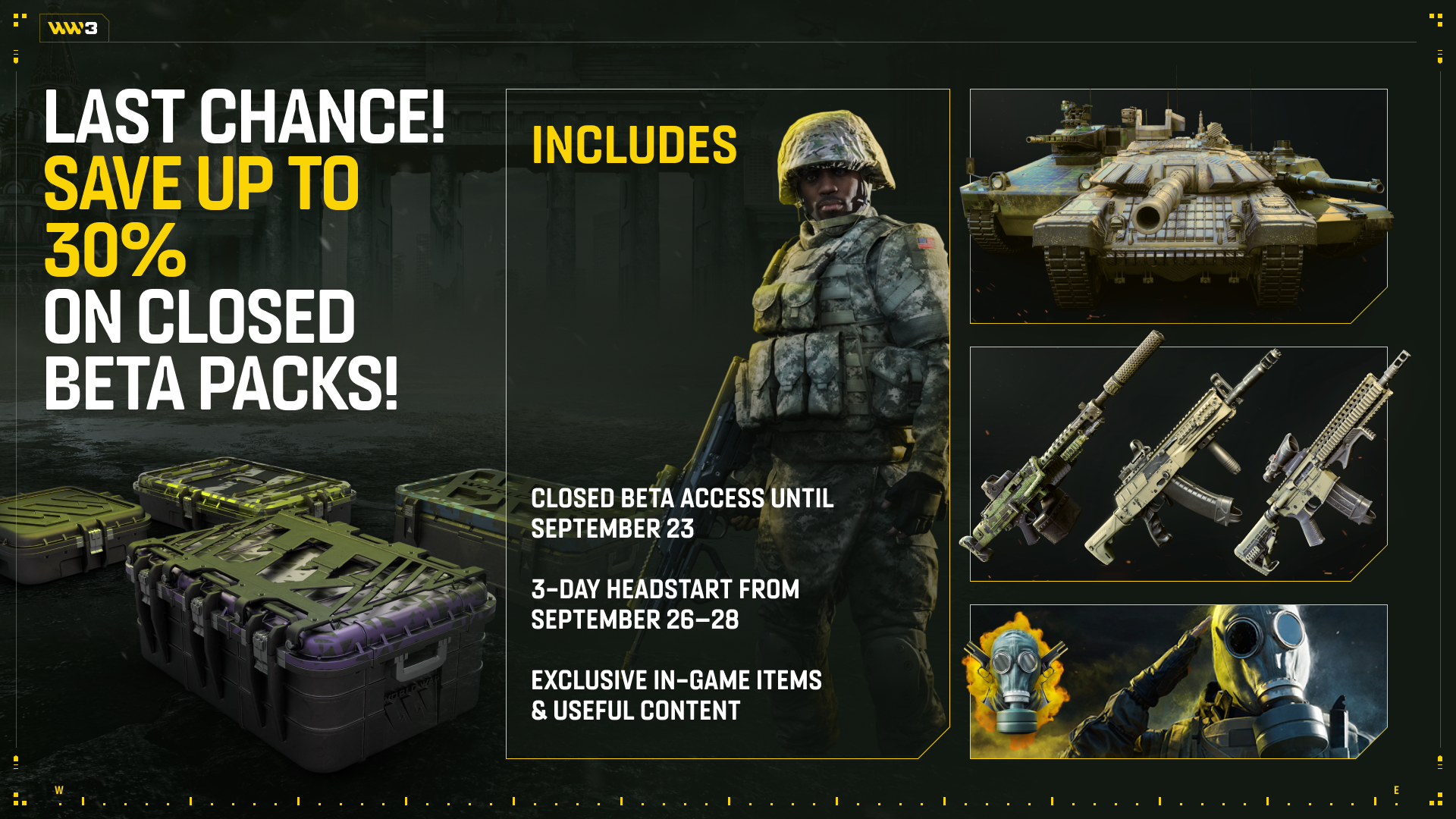 To prepare for the Open Beta launch, the World War 3 Closed Beta Test will end on September 23 at 18:00 CEST. All progress will be reset following maintenance, but items received from Closed Beta Packs, Veteran Packs, Twitch Drops, and Public Stress Test rewards will remain permanently available in Open Beta and beyond. For further details about maintenance and server availability, please follow WW3 social channels.

Celebrate the arrival of Open Beta with free content and bonus XP!

Prepare to experience World War 3, a tactical online FPS developed by The Farm 51. Engage in thrilling, team-based skirmishes by fighting on the ground, driving tanks and vehicles, utilizing drones to survey the battlefield, and calling in tactical strikes for maximum damage. Up to 40 players can battle in two core game modes, Tactical Ops and Deathmatch, with matches fought on a range of stunning, realistic maps. Squad up and take the fight from the streets of Warsaw, Berlin, Moscow, and Polyarny, to the outskirts of Smolensk and beyond!

Times and dates are target estimations and may be subject to change. Follow WW3 social channels for up-to-date information.